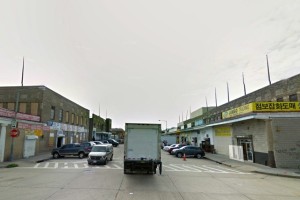 The suspects shot at EMS workers near Union Market, just after midnight. A police chase tore across Capitol Hill before ending near the Potomac Gardens public housing complex in Hill East. The suspects fired at police again there.

The gunfight began when the EMS captain saw people shooting at each other from their cars at 4th and Morse streets NE, police said. The captain and another EMS worker chased after one of the cars.

During the pursuit, the suspects shot at the EMS personnel near 4th and K streets NE. The shooters then tore across Capitol Hill as they were pursued by officers from the Metropolitan Police Department and the U.S. Park Police.

The chase ended at 13th and I streets SE, police said. The suspects shot at police there and ran away on foot.

Police deployed a K-9 unit to help locate the gunmen. But they haven’t been found, and no arrests have been made.

One local said she heard about seven shots near NoMa about midnight, followed by police activity all night.

No one was injured.

This story will be updated.