Police are asking the public to help identify a man caught on video punching a 69-year-old man in the face inside the Eastern Market Metro station.

The incident began when the attacker pushed the man as he exited a train, police said. The men argued as they walked up an escalator. 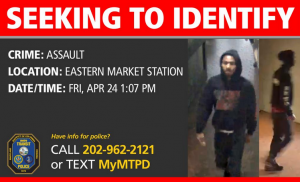 The victim was hospitalized with facial injuries, but was expected to recover.