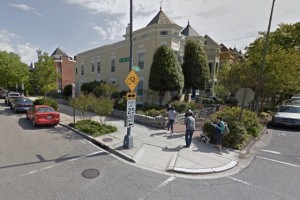 Two people were shot in the Capitol Hill area this weekend, off H Street NE and near the Potomac Avenue Metro station.

Someone was shot in the leg near the H Street corridor early Sunday morning, police said.

The shooting occurred in an alley on the 700 block of 5th Street NE about 1:45 a.m. Sunday. The victim was hospitalized. Police haven’t released any suspect information.

At least one man fired a gun as he and another man tried to rob someone in a stairwell on 700 block of 13th Street SE, the same block as the Potomac Gardens public housing complex. The crime happened about 11:45 a.m., police said.

One of the suspects wore red boots and tan pants, police said. The other suspect had a black jacket, white shirt and large black bag, according to authorities.

On Friday, at least two gunmen fired shots at police near Potomac Gardens, too. The shooting happened after the suspects shot at EMS workers near Union Market and were chased by police to 13th and I streets SE.