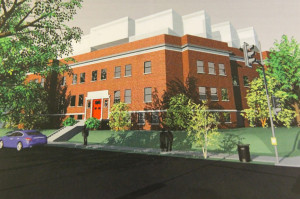 A group that calls itself “a concerned coalition of the Hill East Community” sent a letter to Mayor Muriel Bowser today, asking her to work with the neighborhood on new plans for the building at 261 17th St. SE.

The coalition, like ANC 6B, is seeking “more potential uses and flexibility” for the dilapidated building.

Hill East resident Denise Daniel, who helped write the letter, said it won’t be easy to convince Bowser’s administration to change course on the development. Last month, the interim director of the D.C. Department of General Services wrote a letter to the ANC saying D.C. won’t start from scratch on the building as the group requested.

“We took this positive route and positioning because we feel Mayor Bowser’s administration’s approach to gathering community input and [cleaning] up of city processes is good for the people of the District,” Daniel said today about her letter. “And a restart could prove just that.”

During months of community review, DGS offered a 25-year lease for use of the 31,000-square-foot-facility, which is two blocks west of the Stadium Armory Metro station.

Century Associates, a developer that proposed market-rate units for seniors, said that lease term will make it nearly impossible for them to secure financing for the project. The second bid for the space, from Dantes Partners, proposes affordable units for seniors.

Daniel surveyed several Hill East households on the proposals this year, finding that only 17 percent supported the Dantes bid. More than half favored the Century Associates proposal.

The survey reached 268 households, 81 of which responded.