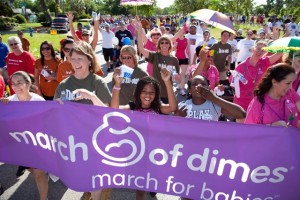 A charity walk is coming to Navy Yard this weekend and it might tie up traffic.

The March of Dimes “March for Babies” will block intersections around Nationals Park and Yards Park Saturday morning. From 9 a.m. to 11 a.m., marchers will walk in a three-mile loop that begins and ends at the ballpark.

The walkers are expected to remain on sidewalks. But they could hold up traffic as they cross streets.

Drivers should expect delays at the intersections of Potomac Avenue and 1st Street SE, 3rd and Tingey streets SE, Tingey and N streets SE, and N and 1st streets SE, according to the Metropolitan Police Department.

The March for Babies raises money to help mothers deliver healthy children. March of Dimes has received more than $320,000 in donations for the walk so far, according to its website. They’re looking to raise more than $508,000.

Photo via March of Dimes