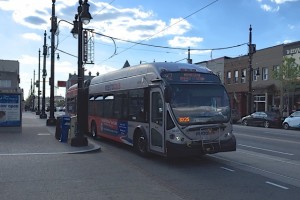 A bus on the much-discussed X2 line was damaged this morning when a juvenile hurled a rock through one of its windows, just one month after a similar incident in the same location.

A westbound bus on the X2 line, which runs along H Street NE, was damaged just before 9 a.m. on the 1900 block of Benning Road NE, Metro spokesman Mike Tolbert said.

Three juveniles exited the bus and then one member of the group threw a rock at the bus’s back door, shattering one of the glass panels, Tolbert said. No one was injured.

Twitter user @JadeMStone told the blog Frozen Tropics she spoke with people onboard the affected bus:

@FrozenTropics Didn’t see it happen, but saw #X2 at 19th & Benning offload b/c someone ran down alley & threw a brick into the #X2Bus window

@FrozenTropics No one was hurt. Only about 7 people were on the bus & they got on next one w/me. They said there was glass everywhere.

Two people were injured on a westbound X2 bus the morning of March 30 when someone reportedly threw a brick through the windshield, at 19th Street and Benning Road NE. There’s no indication the two instances of property damage are related, Tolbert said.

Frozen Tropics and The Washington Post assembled dozens of tweets last month about life aboard the often-raucous X2, covering everything from a passenger going into labor to a homeless woman “putting a curse” on the bus driver.

Ridership on the line recently climbed an estimated 14 percent.

more stories
Previous
Flea Market, Moon Bounce to Hit Near Northeast School This Weekend
Next
Navy Yard Traffic Could Be Snarled by Charity Walk This Weekend