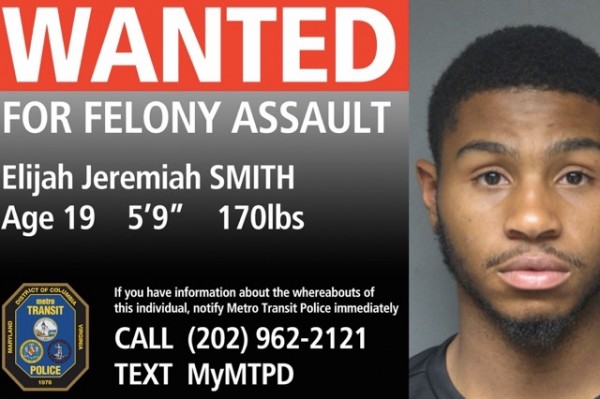 A 19-year-old man from Northeast D.C. is suspected of punching a 69-year-old man in the face inside the Eastern Market Metro station last week, police said today.

Elijah J. Smith, 19, is wanted for the assault, which happened about 1 p.m. last Friday. Metro Transit police have an arrest warrant for Smith, whose whereabouts are unknown.

The incident began when the attacker shoved the man as they exited a train, police said. The pair argued as they walked up an escalator.

The attacker moved in front of the victim on the non-operating escalator and then turned to face him, a video distributed by police shows. The suspect spat in the senior citizen’s face.

Then, the teenager punched the man three times before the victim fell on the escalator. The suspect walked away, as bystanders stopped to help the man, the video shows.

The victim was hospitalized with facial injuries.

Due to the victim’s age, Smith could face an enhanced penalty if convicted of felony assault.

Anyone with information on the identity or whereabouts of the person depicted is asked to call Metro Transit police immediately at (202) 962-2121 and reference case 2015-21061. Tips can also be sent via text message to MyMTPD (696873). Do not take action other than calling police.

more stories
Previous
Hiring a Property Management Company – What Should You Look For?
Next
NoMa Beer Garden to Open in May