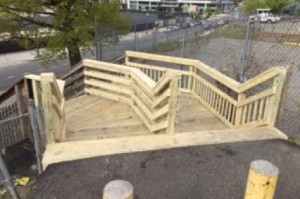 A stretch of the Metropolitan Branch Trail in NoMa reopened yesterday after a fire damaged an entrance to the path.

The portion of the trail between L and M streets NE is open now to bicyclists and runners, following a fire that set an L Street stairway to the path ablaze April 18. The cause of the fire is unclear.

The District Department of Transportation tweeted yesterday afternoon, “DDOT beats the fire,” along with a photo showing new steps and railings for the staircase.

In the days after the fire, yellow caution tape blocked access to the stairway, which were charred at the top. Part of the staircase was missing, and a pile of burnt wood laid on the trail near L Street.