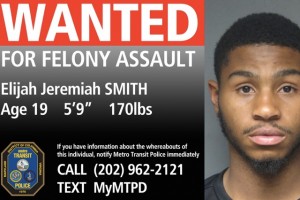 A 19-year-old man suspected of punching a 69-year-old man in the face inside the Eastern Market Metro station was arrested last night, police said.

Elijah J. Smith was apprehended by Metro Transit police 10 days after the April 24 assault. On Thursday, authorities identified Smith as the suspect in the crime and asked the public to help find him.

The confrontation between the attacker and the victim started after the assailant shoved the man as they exited a train, police said. The pair argued as they walked up a non-working escalator.

The attacker moved in front of the victim on the escalator and then turned to face him, a video distributed by police shows. The assailant spat in the senior citizen’s face and then punched him three times.

The victim then fell on the escalator. Bystanders stopped to help the man, as the assailant walked away, the video shows.

The victim was hospitalized with facial injuries.

Due to the victim’s age, Smith could face an enhanced penalty if convicted of felony assault.