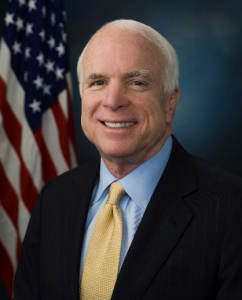 The Friday night parade on Barracks Row will have a big-name guest of honor tomorrow — Sen. John McCain.

The senator will be the guest of Marine Corps Commandant Gen. Joseph Dunford Jr., Barracks officials announced this afternoon. The festivities will include the U.S. Marine Band, Silent Drill Platoon, U.S. Marine Drum and Bugle Corps and two companies of marchers.

“When determining guests of honor for Marine Barracks Washington evening and sunset parades, the Marine Corps typically highlights veterans, public officials and other individuals or organizations who support Marines and their families,” a statement from the U.S. Marine Corps communication office said.

The parade begins at 8:45 p.m. All guaranteed seats are currently booked, but a standby, general admission line will start forming about 7 p.m..

“Ninety-five percent of the time,” people in that line can be seated by 8 p.m., Capt. Diann Rosenfeld said.

More than 3,500 people attend the Friday evening parades at the Marine Barracks every Friday night through Aug. 28, as Hill Now reported earlier this year.