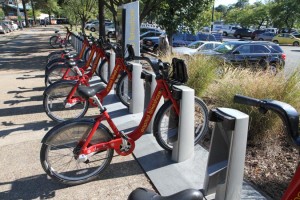 (Updated at 5:15 p.m.) Navy Yard and Southwest are among the most popular destinations for Capital Bikeshare riders in the District.

The station at 7th and Water streets SW was the No. 3 most popular destination station in the District, followed by 3rd and Tingey streets SE (at No. 6), New Jersey Avenue and M Street SE (at No. 8) and 4th and E streets SW (at No. 10).

The most common use for Bikeshare is traveling to work, according to District, Measured.

Overall, a station at the Georgetown Harbor was the most popular destination station.

District, Measured calculated the percentage of rides that were arrivals and departures for each stop in D.C. to see which stations were favored as destinations. Taking into account only Bikeshare checkouts, however, stops at Union Station, Dupont Circle and the Lincoln Memorial are the busiest, according to the organization.