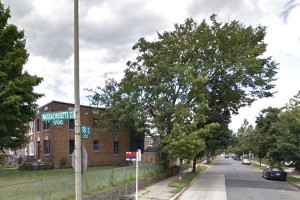 (Updated at 9:15 a.m.) Two people were shot a block from the Stadium-Armory Metro station last night.

The shooting happened about 11:15 p.m. on the 200 block of 18th Street SE, a residential area in Hill East, police said. The victims told police they heard gunshots and then discovered they were shot.

Vehicles, including a black Dodge truck, possibly were involved in the shooting, according to authorities.

Police didn’t have any information about the shooter.

The Metropolitan Police Department tweeted about 1 a.m. it closed part of the 200 block of 18th Street, between Massachusetts Avenue and Bay Street SE. By 4:15 a.m., MPD had reopened the street.