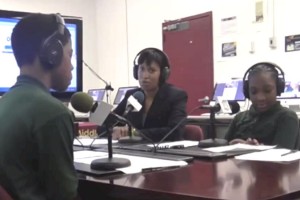 Students at Eliot-Hine Middle School are trying to land a television interview with President Barack Obama at the White House.

A petition went up last week on the White House’s website, asking Obama to appear on the Eliot Hine Network. The network is run by students under the direction of teacher Mandrell Birks.

Since Birks launched the network last year, students already have interviewed Mayor Muriel Bowser, Councilman Charles Allen of Ward 6 and sportscaster James Brown, among others. The students also have appeared on “The Queen Latifah Show.”

Now, they want Obama to come on their network.

“Students are currently building the Eliot Hine Network by investigating, planning, creating and evaluating the entire structure of this unique broadcast media initiative,” the petition says. “The students are embracing technology with an attitude that looks towards their upcoming career goals. Anyone who witnesses the student interaction with our broadcast media equipment will be completely astonished at how students utilize their technical skills.”