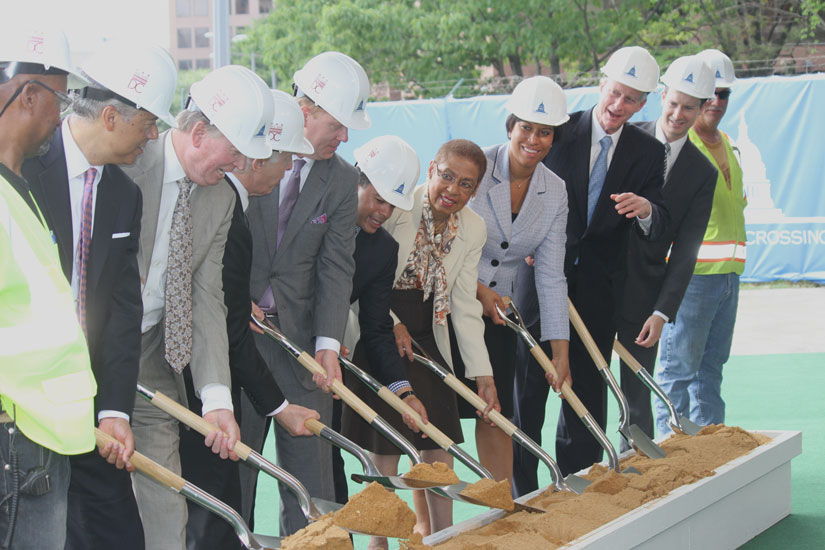 Construction of the $1.3 billion Capitol Crossing development over I-395 officially began this morning, with the assistance of Del. Eleanor Holmes Norton, Mayor Muriel Bowser and other shovel-wielding dignitaries.

The three-block development, which is just west of the Georgetown University Law Center, will feature 2.2 million square feet of office, retail and housing space. Capitol Crossing will span between Massachusetts Avenue NW to the north and E Street NW to the south and 3rd Street NW to the west and 2nd Street NW to the east, bridging the Capitol Hill and East End neighborhoods.

Norton said there has “never been a project of this complexity” in D.C. In addition to the buildings from Property Group Partners, the construction also will bring new ramps to I-395 and reconnect G and F streets NW over the freeway.

Bowser asked locals to be patient as work on Capitol Crossing continues. Since construction started earlier this year, D.C. has closed lanes around the area to help builders. A contractor working on the project also struck an 8-inch water main in March, snarling traffic.

“There will be challenges ahead,” Bowser said. “We invite all of our neighbors and commuters to pardon the dust while we’re making progress.”

During the groundbreaking ceremony, representatives of Property Group Partners didn’t say which retailers will fill the 70,000 square feet of retail space the developer has set aside for them. But Mario Batali’s Eataly Italian market may come to Capitol Crossing, Washington City Paper reported last year.