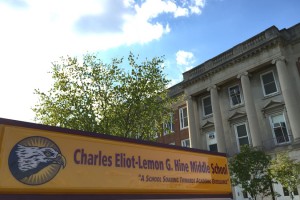 Eliot-Hine and Jefferson Academy middle schools wouldn’t get the money locals have requested for major renovations in the coming year under a new D.C. Council budget plan.

The Ward 6 schools would have to postpone modernization plans until at least fiscal 2017, according to a fiscal 2016 budget proposal released by the D.C. Council Education Committee today. But most renovation work would begin in fiscal 2019, as Mayor Muriel Bowser has proposed.

Jefferson at 801 7th St. SW would receive $3 million in fiscal 2017 to help start renovations. But Eliot-Hine at 1830 Constitution Ave. NE wouldn’t get any money until fiscal 2019 to begin its modernization.

Overall, Jefferson would receive $36 million for renovations between fiscal 2017 and 2020, according to the D.C. Council plan. The sum is $12 million more than the $24 million Bowser has proposed.

Eliot-Hine would get $38.1 million for modernizing the school between fiscal 2019 and 2020, under the Council’s proposal. The amount is $4 million more than the $34.1 million the mayor wants to offer.

Despite the proposed increase in the modernization budget for Eliot-Hine and Jefferson, Joe Weedon, Ward 6′s representative to the D.C. State Board of Education, said he can’t support the Council’s timeline for renovations.

“I am disappointed to see that the renovations of Eliot-Hine MS and Jefferson Academy MS were not restored” for fiscal 2016, Weedon said on his website, adding that locals should tell the D.C. Council not to approve the budget proposal.

Councilman Charles Allen of Ward 6 wasn’t immediately available for comment. But he has said he has concerns with proposed funding delays for renovations at Eliot-Hine and other Ward 6 schools.

He said at a hearing he saw doors falling off hinges and paint peeling at Eliot-Hine.

“It was a mess,” he said. “I’m going to keep pushing and fighting.”

The Council’s Education Committee is scheduled to vote on the budget proposal tomorrow.