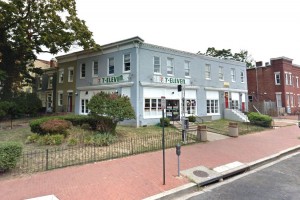 The robbers stole cash from the register and then fled.

Armed robberies are up this year in Police Service Area 107, where the 7-Eleven is located.

District crime statistics show 11 robberies with guns were reported in the area from Jan. 1 to May 13, compared to four of the crimes during the same period the previous year.

Photo via Google Maps and video via the Metropolitan Police Department