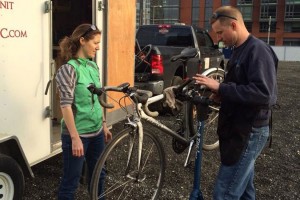 A Navy Yard resident who fixes bicycles across Capitol Hill is fundraising to turn a food truck into a bike repair truck.

“Think food truck, without the food,” the site says.

Since he started his business in 2013, Buck found that his pickup truck and trailer — which together stretch 38 feet in length — aren’t ideal for maneuvering through D.C. streets and parking on them. He usually sets up evenings and weekends near 1st and K streets SE, offering services that include a $10 flat tire repair and a $59 basic tune-up.

Buck, 33, said he would like to move throughout the District with a vehicle similar to a food truck. But mobility with his current setup is a “little untenable,” he said.

“The execution was a bit lacking,” Buck said.

If he doesn’t reach his goal, Buck said he will continue to fix bicycles and try to raise money again.

“This business is not going to fold,” he said.