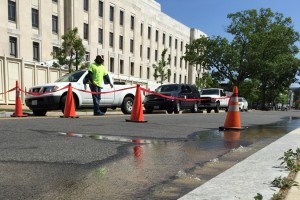 (Updated at 3:25 p.m.) Officials have closed a street east of the Capitol because of a water main break.

Second Street SE is closed between East Capitol Street and Independence Avenue, near the Library of Congress.

A steady stream of water was flowing there this afternoon.

A 12-inch water main burst earlier today, DC Water spokeswoman Pamela Mooring said. Repairs are set to begin at 7 p.m. and continue for six to eight hours, until as late as 3 a.m. It won’t be clear until repairs begin whether anyone’s service will be disrupted tonight or early into tomorrow morning.

The Library of Congress was open as of 2:50 p.m. and had running water.

The street closure is expected to be in effect overnight, according to the Senate Sergeant at Arms.