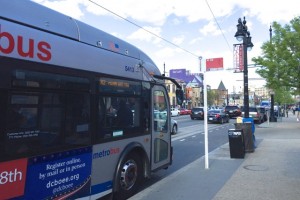 A man with a knife assaulted a passenger on board the X2 bus yesterday afternoon near the H Street corridor.

The assailant struck about noon on the 1600 block of Benning Road NE, according to authorities. The man and the victim struggled over the knife, then police responded and ordered the attacker to drop the weapon.

J.C. Rivers, 57, was arrested in connection with the incident, which police called an assault. The victim received minor injuries and was treated at the scene, and Rivers was hospitalized, police said. It wasn’t immediately clear if the passengers knew each other.

The attack is the latest in a series of reported crimes and other incidents involving the X2 line.

Last month, a man flashed a knife at a woman on the bus. In April, a juvenile hurled a rock at an X2 bus’s back door, shattering one of its glass panels. And in March, someone reportedly threw a brick through the windshield of an X2 bus, injuring two people. In January, a man shot two X2 riders.