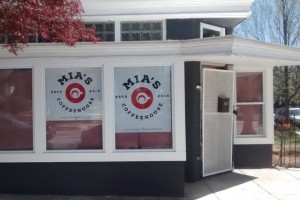 A pet-friendly cafe in the Capitol Hill area will open to the public for the first time this weekend, with some free coffee and horchata.

Mia’s Coffeehouse at 101 15th St. NE will have the drinks Saturday from 9 a.m. to 11 a.m., as the cafe’s owners work to ready the former Bella Market space for an official opening.

Jeff Lee, who is running Mia’s with his wife, Jenohn, said he’s hoping to officially begin business at the cafe the first week of June. Right now, Lee said he’s working on equipment installation and decorations.

In an email to locals, the owners said they would like people to see the progress they’ve made, and bring their pets.

“We would love it if you would swing by and say, ‘Hi!'” the email says. “Now, we will be working feverishly that day as we are working hard to get officially open, however coffee will be brewing.”

Once officially open, Mia’s will serve pour-over coffee, lattes and other hot drinks, as well as breakfast and lunch sandwiches.

Its regular business hours will be Monday through Thursday from 6 a.m. to 9 p.m. On Fridays and Saturday, the coffeehouse will serve customers between 6 a.m. and 10 p.m. It will be closed on Sundays.

more stories
Previous
Women Attack Man With Bat Near H Street Wal-Mart
Next
Contract Components in a Competitive Market: Are You in It to Win It?