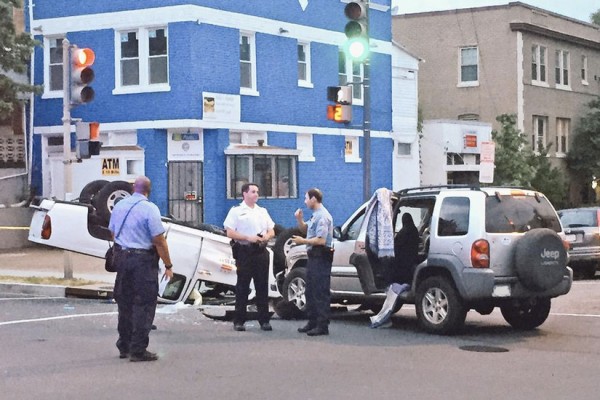 A friend sent her a link to a Hill Now article about a stolen Jeep slamming into a D.C. government vehicle this past Monday. Looking closely at the photo, Alex could make out her rain jacket and the blue blanket she has her dog sit on when it rides in the car. That’s when she realized — while sitting in an In-N-Out Burger in Los Angeles — the vehicle in the photo was her 2004 Silver Jeep Liberty, which had been stolen the previous week.

Frustrated that she had to find out about the vehicle’s status through a news story, instead of getting a call from the authorities, Alex — who didn’t want her last name used for this article — called D.C. police for more information.

A D.C. police official declined to discuss the investigation into the stolen Jeep with Hill Now, though he did say that typically protocol is to contact the owner of the stolen vehicle once it has been recovered.

Last Friday, May 15, Alex’s Jeep was stolen from the 1500 block of Independence Avenue while her friends dropped her off at the airport so she could attend the National Women, Infants and Children Conference in Los Angeles.

Alex, who lives in Richmond, says she was in D.C. for a work trip and hoped that keeping her car at her friend’s place would help her avoid the airport parking fees.

Now back in Virginia, Alex says she’s getting around in a rental car. At last check, the four suspects who reportedly bailed out of her Jeep after the crash on Monday were still on the loose.