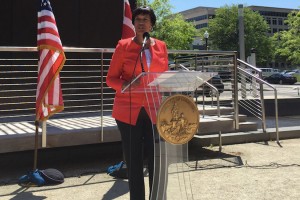 Go-go musicians, a symphony and a performing arts group descended on a Navy Yard park today for a pop-up showcase, as part of a new program to encourage art in D.C. neighborhoods.

Teaching for Change, the Gourmet Symphony and the Atlas Performing Arts Center came to Canal Park to show off projects they’re working on for the Capitol Hill area and other parts of the District. The event launched “District Innovation Zones,” which Mayor Muriel Bowser said will provide a temporary “stage for artists” at Canal Park and other locations across D.C.

A group of musicians with Teaching for Change performed go-go music, while children danced nearby. Through its “Teach the Beat: Go-Go Goes to School” program, Teaching for Change aims to bring the District’s homegrown music genre to history, language arts and music classes in Ward 6 and other portions of D.C., said Deborah Menkart, the group’s executive director.

Across the park, members of the Gourmet Symphony played near a table of Italian food. The group is working with local social service groups to bring live chamber music to the District’s homeless when they eat.

Atlas Performing Arts Center representatives also showed examples of mobiles it will use in a installation that is set to go on display in September. The organization is looking for the public to help it make more than 50 mobiles for the project.

To help create the mobiles, the arts center will have workshops in its space on the H Street corridor, as well as D.C. community centers and schools.

“We look at these mobiles as a great metaphor of many different parts coming together to create a new whole,” said Douglas Yeuell, the organization’s executive director.

Teaching for Change, the Gourmet Symphony, the Atlas Performing Arts Center and other organizations received grants for their projects earlier this month through the D.C. Commission on the Arts and Humanities.