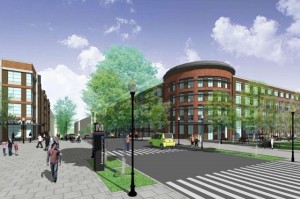 A restaurant with table service could come to the far eastern edge of Capitol Hill in the next few years.

Plans are in the works to put the sit-down eatery on a 2-acre lot by the south entrance to the Stadium-Armory Metro station, Larry Clark, a Donatelli Development vice president, said last night at a Hill East community meeting.

Donatelli is working with Blue Skye Development to build retail space, as well as 354 housing units and green areas, on the property. Known as Reservation 13 or the Hill East District Development, the land stretches east of 19th Street SE between extensions of Burke Street SE and Massachusetts Avenue SE.

Clark declined to name the restaurant and other businesses that are in talks to open in the development’s 40,000 square feet of retail space. But he said his company is working to get a gym and a “Dunkin’ Donuts”-type coffee shop, among other amenities.

“We want as good of retail as possible,” Clark said, speaking at an ANC 6B Hill East Task Force meeting.

A grocery store is a possibility, too, he said.

Donatelli had tried to bring Harris Teeter to the property, Clark said. But he said talks stalled when Kroger bought Harris Teeter last year, and Donatelli decided to move ahead without them, for now.

“I think they’re making a mistake,” Clark said. “But they could be back.”

Construction of the development is slated to start next year and end in 2018.

Overall, the District is planning the redevelopment of 50 acres of Reservation 13, which spans 67 acres. Full redevelopment would depend upon the closure of the homeless shelter at D.C. General, according to WAMU.