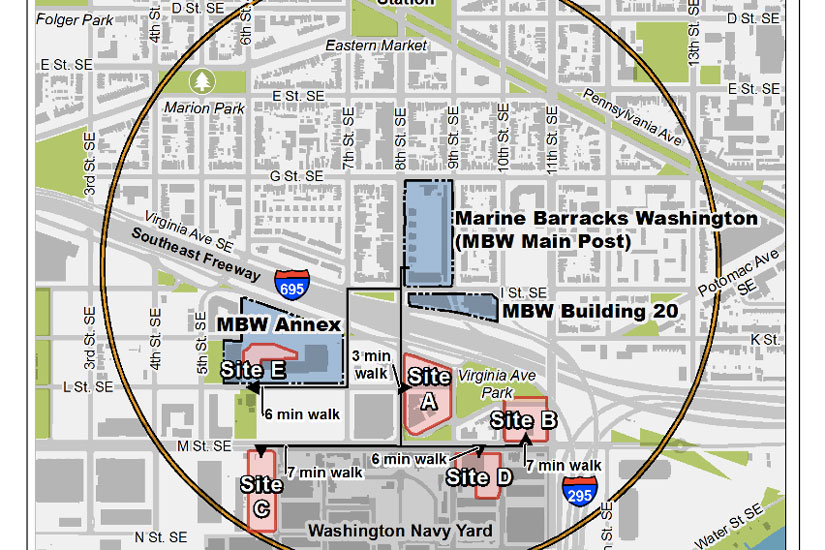 (Updated at 9:45 a.m. Wednesday) The U.S. Marine Corps would receive new housing on federal land in the Navy Yard neighborhood under a plan supported by Del. Eleanor Holmes Norton.

The congresswoman has called on the military to construct a new “Bachelor Enlisted Quarters” for marines on one of two areas the U.S. government owns in Near Southeast. The military is considering the two locations and three privately owned or leased sites in the neighborhood for the quarters, which would house marines stationed at the 8th Street SE barracks.

Released by the Marine Corps in April, the plan calls for the new quarters to replace the existing housing at 8th and I streets SE. All five locations under consideration are located between 5th and 11th streets SE, south of Southeast Freeway.

Putting the new housing on any of the privately owned or leased sites would cause “significant negative impacts” on D.C. residents, Norton wrote in a letter to the Marine Corps released today. Those locations include Site C just west of the Washington Navy Yard  and Sites A and B, adjacent to the Virginia Avenue Park.

Site D within the boundaries of the Washington Navy Yard and Site E within the Marine Barracks Annex property at 1053 7th St. SE are the “best options” for the new quarters, Norton wrote.

“The Marines cannot now swoop in and take these prized sites in a city that has almost no land left for development for the benefit of its growing population and businesses,” she wrote.