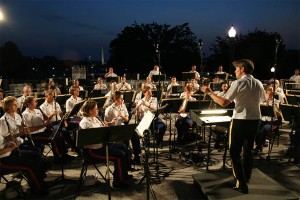 The Navy Band will kick off the 2015 series of concerts from the U.S. military on Monday at the U.S. Capitol.

An announcement for the performance, listed on the Architect of the Capitol’s website, also lists upcoming performances by the United States’ Navy Band, the Air Force Band,  the Army Band and the Marine Band for the rest of the summer.

All concerts will commence at 8 p.m. on the National Mall side of the U.S. Capitol West Front Steps, weather permitting. Set-up begins at 4 p.m. The complete summer schedule is listed on the Architect of the Capitol’s website.