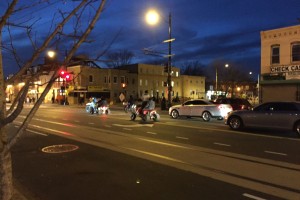 A group of illegal ATVs charged at a police car near NoMa last week, after an officer tried to stop one of them, the area’s top law enforcement official said last night.

The officer involved in the incident went against MPD policy in an attempt to stop what he thought was a single ATV, Brown said. Although D.C. Code prohibits all ATV riding on public property in the District, an MPD safety policy bars officers from stopping or chasing the vehicles.

When the officer approached the ATV, about a half-dozen of the vehicles arrived and surrounded him, Brown said. The officer then retreated to his car, which the ATVs hit.

The officer didn’t receive any injuries, Brown said. But the ATVs scratched the car’s front bumper.

Police have no suspect information.

Under MPD’s plan for illegal ATV and dirt bikes, officers who see the vehicles drive past them should relay information about the incident to their colleagues, who use cameras and other tools to safely identify the riders, Brown has said.

“They may get a free ride of their ATVs for that particular day,” he said last night. “But once we get them identified, we present the warrant and go from there.”