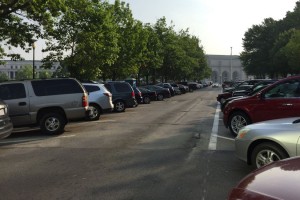 Community leaders on Capitol Hill are urging D.C. and federal officials to install protected bicycle lanes that would connect cycle tracks near Union Station and the U.S. Capitol.

The two-way cycle track ANC 6C formally requested last night would be on Louisiana Avenue, between Columbus Circle NE and Constitution Avenue NW. The bike lanes are intended to bridge the Pennsylvania Avenue NW bike lanes with the 1st Street NE cycle track that is under construction, helping link bike lanes that stretch across the District.

The District Department of Transportation last year identified the cycle track as a second tier priority in the “Multimodal Long-Range Transportation Plan” it released last year. The cycle track, which would be almost a half-mile long, would cost $900,000 to complete, according to DDOT.

To build the bike lanes, DDOT would need the approval of the Architect of the Capitol. Louisiana Avenue NE between Columbus Circle and North Capitol Street NE has three lanes for congressional staffer parking, one of which needs to go to support the cycle track, the ANC wrote in a letter it approved last night to DDOT Director Leif Dormsjo and Architect of the Capitol Stephen Ayers.

A DDOT spokeswoman didn’t have an immediate comment. A representative of the Architect of the Capitol wasn’t immediately available to comment.