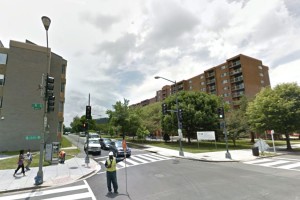 Four masked men with guns robbed a pizza delivery man of his money near NoMa early this morning.

The thieves, who were armed with handguns and rifles, struck at 1st and K streets NW, police said. The robbery happened about 2:30 a.m.

A violent would-be robber also tried to steal a woman’s purse last night in Hill East, before a man came to her aid, police said. The attempted theft happened on the unit block of 14th Street NE about 10 p.m.

The suspect, who is a man, grabbed the victim from behind and attempted to use a knife to cut the strap of her purse, police said. The woman was then cut in the neck as she and the man struggled.

The man fled after a witness came out of his house to help the woman, police said.

A trio of female juveniles also snatched a woman’s purse in a violent robbery last night in the Capitol Hill area, police said. The theft occurred on the 1000 block of C Street NE about 10 p.m.