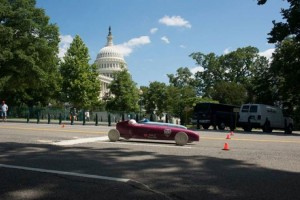 Young speed enthusiasts will race cars through Capitol Hill this weekend — with or without driver’s licenses.

The Greater Washington Soap Box Derby is slated to return Saturday for its 74th running. Constitution Avenue and First Street NW near the U.S. Capitol will close to traffic from 5:30 a.m. to 7 p.m. for the race, according to U.S. Senate Parking Operations.

Children, who are 7 to 18 years old, will compete in handmade soap box cars. The race has divisions for children who are 13 years old or younger and who are at least nine years old.

The winners of the two divisions will advance to the All-American Soap Box Derby championship next month in Ohio.

It it rains Saturday, the D.C. race will happen Sunday.