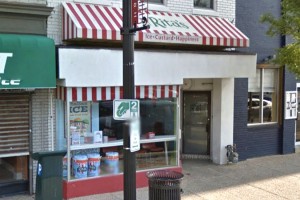 A man with a gun robbed an Italian ice and frozen custard shop on the H Street corridor yesterday afternoon.

The robber flashed a gun and demanded money from a cashier. The worker then gave the man an undermined amount of cash before he fled.

Police described the suspect as a 6-foot-1 man wearing black clothing, including a black hooded shirt.