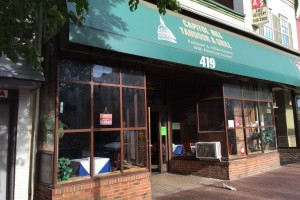 An Indian-Pakistani eatery on Barracks Row has reopened following a food safety and hygiene inspection that revealed live roaches and evidence of a “heavy” rat infestation last week, according to the D.C. Department of Health.

The restaurant at 419 8th St. SE has been open since at least Friday after a DOH inspector closed it Tuesday, the agency announced Friday. The exact day the eatery passed a follow-up inspection and resumed business wasn’t immediately clear, however.

The inspector found “fresh and old rat feces, gnaw marks on walls, [and] holes in walls and floor [and] wall junctures” Tuesday, according to a recently released DOH report. Live roaches were discovered in storage areas, too.

The eatery also had “no means with which to cool food and keep food cold,” the report says, noting that the restaurant’s walk-in cooler wasn’t working.