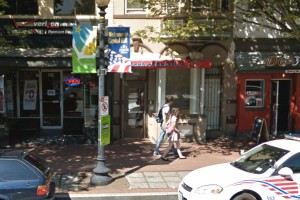 A man tried to rob a nanny with two boys this week on Barracks Row, according to the mother of one of the children.

The would-be thief struck near the Bank of America ATM at 425 8th St. SE Monday morning, said the mother, who declined to be named.

A police report filed later that day appears to corroborate the mother’s story. Authorities are looking for a 45-to-50-year-old man in connection with an attempted robbery on the 400 block of 8th Street SE about 8:45 a.m. Monday. The man appeared to be homeless, police said.

The nanny and the boys were depositing a check at the ATM when a man asked the woman for money, which she said she would give him, according to the mother.

After the nanny made her deposit, the man grabbed her arm and and purse in an attempt to rob her, the mother said. A witness then ran to the nanny to help her, and the would-be thief fled.

“He clearly thought she was an easy target with the stroller,” the mother said. “This is very scary and completely unacceptable.”