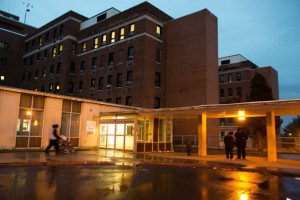 Homeless families will continue to live in the D.C. General shelter through this winter as the D.C. government works to shutter the troubled facility “quickly,” a District official said last night.

Laura Zeilinger, director of the D.C. Department of Human Services, told Hill East residents at a community meeting that a precise timeline for the closure is “very difficult” to determine at this point.

Mayor Muriel Bowser released a plan earlier this year in her budget to close D.C. General and replace it with smaller shelters across the District in the next two years. The D.C. Council is expected to have a final vote to approve the budget next week.

“We will not close D.C. General until we know we have the appropriate replacement or else we will end up recreating a situation that is not viable in some other building somewhere else,” Zeilinger said.

Deputy Mayor Brenda Donald, who joined Zeilinger at the meeting, said she knows the shelter is inadequate for families and the government is moving as fast as it can to shutter the facility.

“None of us in the [Bowser] administration believe D.C. General is a place where children and families should live,” said Donald, who oversees health and human services for the District.