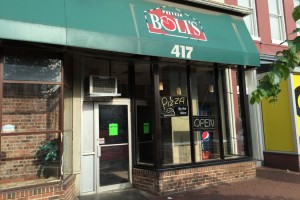 The Pizza Boli’s on 8th Street SE had rodent droppings, live cockroaches and large houseflies when a food safety and hygiene inspector stopped by the eatery last week, according to the D.C. Department of Health.

The pizza shop at 417 8th St. SE was closed temporarily last week after the inspector discovered a “gross insanitary occurrence or condition that may endanger public health including but not limited to heavy infestation of vermin,” DOH said at the time.

In the full inspection report released yesterday, the agency says the inspector found rat droppings beneath and behind equipment, large house flies inside Pizza Boli’s and live roaches behind the eatery’s refrigerator and near its walls during a June 22 inspection.

Pizza Boli’s was closed June 22 and resumed business Thursday, when it passed a follow-up inspection.

Maroula Giannaros, a Pizza Boli’s spokeswoman, said last week that the eatery wouldn’t reopen “until it meets our corporate standards of quality and safety.”