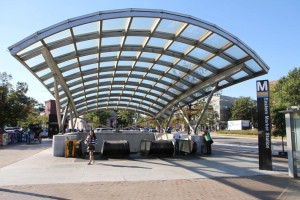 Metro Transit police yesterday arrested a 14-year-old D.C. boy wanted for a string of robberies at Eastern Market and other Blue, Orange and Silver line stations.

Thieves have snatched several iPhones from riders between the Eastern Market Metro station and the New Carrollton and Largo Town Center Metro stations since May, police said.

The juvenile will face charges in D.C. in connection with six iPhone thefts between May 27 and June 15. The thefts include May 31 and June 9 robberies at the Eastern Market Metro station.

An investigation is ongoing to identify whether the suspect is linked to any other cases. Metro Transit police initially said they were looking for suspects in other iPhone robberies in addition to the thefts the teenager is accused of committing.

A video police released last month in connection with the thefts appears to show four young men running away from a train stopped at the Deanwood Metro station about 10:30 p.m. on June 1.

Metro Transit police said they’ve “significantly increased patrols” aboard trains and at stations in response to the robberies.