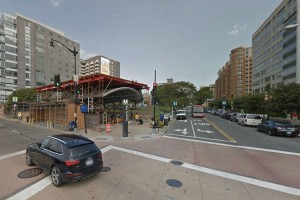 (Updated at 1:55 p.m.) A construction worker was hospitalized after a fire and EMS team rescued him from the bottom of a 60-foot deep hole in Navy Yard this morning.

The D.C. Fire and EMS Department received a report about 8:30 a.m. that a person working in a pit on the 1100 block of New Jersey Avenue SE needed medical help, said Timothy Wilson, a spokesman for the agency. The man had serious, but non-life-threatening injuries, Wilson said.

Megan Vallach, a spokeswoman for Donohoe Construction Co., which is building the mixed-used Gallery at Capitol Riverfront on the block, said the man felt dizzy while working at the bottom of the hole.

“Rather than having him climb the ladder to come up from the hole our team took the necessary precautions and called D.C. Fire and EMS,” Vallach said in an email. “No injuries were sustained on site.”

WTOP was the first news organization to report on the rescue.