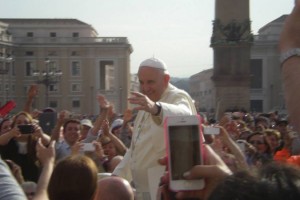 Capitol Hill residents and visitors looking to catch a glimpse of Pope Francis during his visit to D.C. this fall might see him on the U.S. Capitol’s West Front.

The pope has “expressed an interest in making a brief appearance on the West Front” on Sept. 24, House Speaker John Boehner (R-Ohio) announced today. But the exact timing of his possible appearance wasn’t immediately clear.

Francis is scheduled to address a joint session of Congress at 9:20 a.m. that day before traveling to St. Patrick’s Catholic Church in downtown D.C. at 11:15 a.m.

Visitors to the Capitol grounds can view a live broadcast of his speech on the West Front, according to Boehner.

“We look forward to welcoming Pope Francis and Americans from all walks of life to our Capitol on September 24,” the House speaker said.