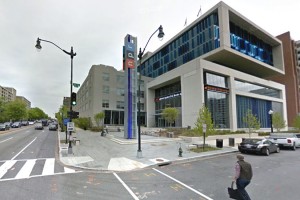 A man with a gun robbed someone in NoMa this afternoon.

The thief and an accomplice struck about 1:30 p.m. at L and North Capitol streets NE, near NPR’s headquarters, police tweeted.

The armed robber was wearing all black clothing, including a black scarf, according to authorities. His accomplice, who is also a man, had a gray or white shirt and blue jeans.