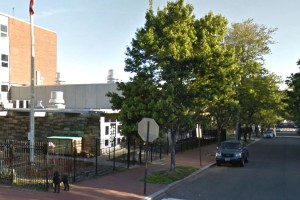 A man was grazed with a bullet near the H Street corridor this week after three masked men with guns tried to rob him.

The men struck on the 600 block of 10th Street NE about 10:45 p.m. Tuesday, police said today. The block includes School Within School and the Sherwood Recreation Center.

The would-be thieves pulled guns on the victim and ordered him to give them his property, according to authorities. When the victim tried to run away, he was shot.

The man received treatment for his graze wound, police said.