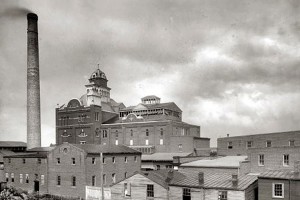 Two Hill East alleys might be named in honor of the owners of two breweries that once sat where the Safeway grocery store is now.

ANC 6B is set to vote tomorrow on a resolution that would propose naming a 16-foot alley and 30-foot alley that are between D and E streets SE.

The shorter alley would be called “Carry Way” for National Capital Brewing Co. owner Albert Carry, who converted his brewery into the Carry Ice Cream Co. during prohibition. The larger alley would be named “Guethlers Court” to pay homage to John E. Guethler, who owned and operated a brewery at that location in the 1800s.

Discussions to name the alleys came after construction began on a house at the intersection of the two roadways. ANC 6B commissioner Nick Burger, who authored the resolution, said emergency personnel might have trouble finding the house if the alleys don’t have names.

Naming the alleys also might help residents of the planned Buchanan School development navigate the area, he said.

The ANC’s transportation committee voted last week in support of the measure. If the full ANC approves the resolution tomorrow, the commission will ask Councilman Charles Allen of Ward 6 to introduce legislation to name the alleys.