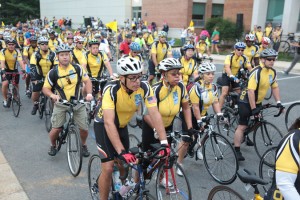 A charity bicycle ride benefiting cancer research is set to pass through the Capitol Hill area this fall.

The riders will cycle 150 miles via Mt. Airy, Md., in their trip to and from RFK, stopping periodically for food and beverages throughout the route.

The cyclists raised $2.6 million last year, and organizers are hoping to top that in 2015. Non-participants can donate right up until the day of the ride.

Organizers don’t know yet how many people will participate. But more than 1,000 riders took part last year.

Ride to Conquer Cancer has a particularly special tie for John Murph, who’s riding for the second consecutive year.

The 48-year-old journalist from Petworth lost his father to lung cancer in September 2013. Completing the ride last year is something he said he will never forget.

“The 2014 race was one of the highlights of my life,” Murph said. “While the battle against cancer is making ground, there is still work to be done.”