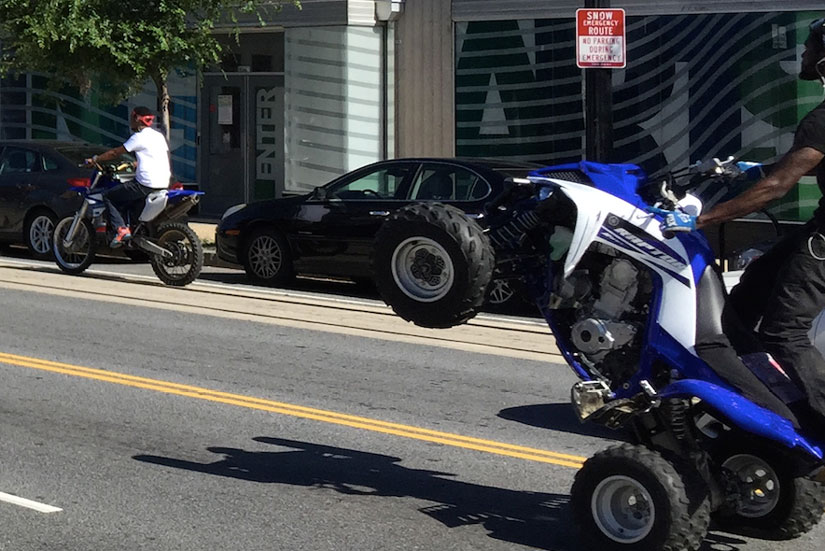 Councilman Charles Allen of Ward 6 today helped introduce legislation that would impose stiffer penalties on people who illegally drive ATVs and dirt bikes in the District.

The measure also would let the District bar people from obtaining a driver’s license for six months if they’re convicted of illegal ATV or dirt bike driving.

ATV and dirt bike drivers currently only face a fine up to $250 and 30 days in jail, or both, regardless of the number of times they’ve been convicted of illegally operating the vehicles.

Allen, whose ward includes the H Street corridor, a popular destination for ATV and dirt bike drivers, tweeted he was excited to co-sponsor the bill, which Councilman Kenyan McDuffie of Ward 5 offered at a D.C. Council’s meeting this morning.

“This is a safety issue,” Allen said of illegal ATV and dirt bike driving.

Locals have expressed frustration about groups of ATV and dirt bike drivers who regularly zoom around the District.

Although a Metropolitan Police Department safety policy bars officers from chasing the vehicles, police who see the vehicles drive past them are told to relay information about the incident to their colleagues. The police then use cameras and other tools to safely identify the riders.

In May, a group of illegal ATVs charged at a police car after an officer tried to stop one of them. The officer didn’t receive any injuries, but his car was scratched.

“They may get a free ride of their ATVs for that particular day,” First District Commander Jeff Brown said at the time. “But once we get them identified, we present the warrant and go from there.”