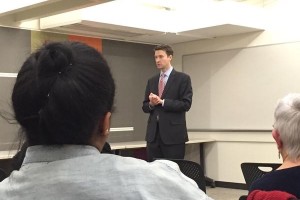 (Updated at 3:25 Thursday) NoMa residents will have the chance tonight to talk with police and Councilman Charles Allen of Ward 6 about crime in the neighborhood after two shootings in the area this week.

“Please come share your questions and concerns with the councilmember and” the Metropolitan Police Department, Allen’s office said in an announcement.

On Sunday, a man was killed and another man was injured after two separate NoMa-area shootings.

Timothy Bing, a 36-year-old man from Northeast D.C., was shot to death on the 900 block of 3rd Street NE late Sunday night.

The homicide came after two burglars shot a man in the Flats 140 apartment complex at 140 M St. NE early Sunday morning. The victim was hospitalized.