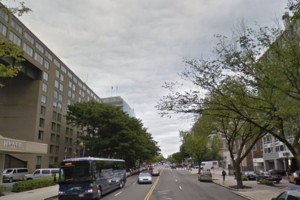 A man reached into a woman’s bra and took her property when she was sitting on a bench near two New Jersey Avenue NW hotels early this morning, police said.

The robbery happened on the 400 block of New Jersey Avenue NW about 1:15 a.m., according to authorities. The Hyatt Regency Washington on Capitol Hill and Liaison Capitol Hill DC are on the block.

Paul Christopher Campbell, 48, was arrested in connection with the robbery, police said. Information on his lawyer wasn’t immediately available.

A group of thieves also swarmed a car in Hill East early yesterday morning and robbed a man in the vehicle.

The robbery occurred about 12:30 a.m. Tuesday on the 1400 block of Pennsylvania Avenue SE, police said.

Three people gathered around the car and hit the man inside it with a gun before robbing him, according to authorities. They then fled to I Street SE.

Clarence Campbell, 24, was arrested in connection with the robbery, police said. Information on his lawyer wasn’t immediately available.

Police haven’t made any other arrests concerning the robbery.