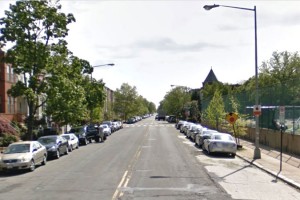 A man robbed three people at gunpoint on F Street NE after he and another man rode up to them on bicycles early yesterday morning.

When the cyclists approached the victims, one of the men flashed a handgun and demanded money, according to authorities. The victims complied, and the men fled.

Police said one of the men had a multi-colored T-shirt and the other suspect rode a bicycle with a mud flap over the back tire.

Authorities didn’t release any other information about the men.