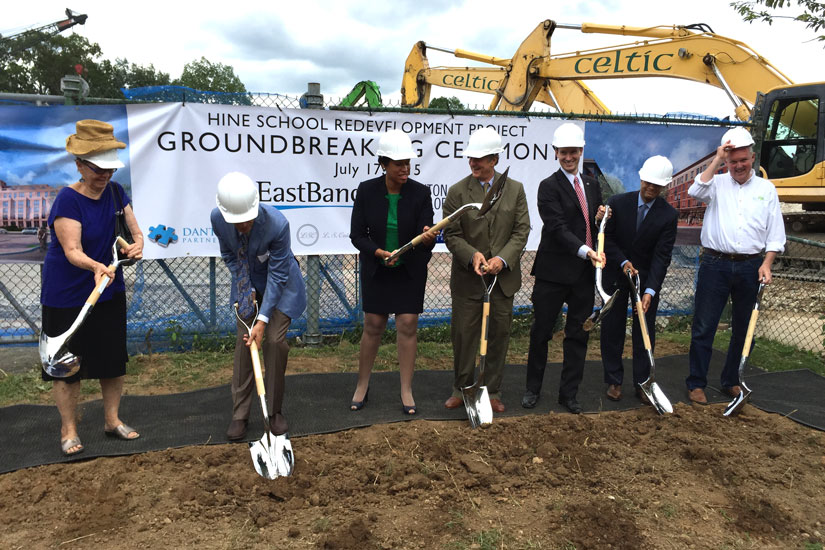 The groundbreaking ceremony for the transformation of the former Hine Junior High School property at 700 Pennsylvania Ave. SE into homes, retail and office space followed more than a month of demolition work. Construction is expected to end in 2017.

“I’m actually pretty shocked by the site behind me,” Bowser said as she stood in front of where the school used to stand. “I have looked at this site . . . for my entire life one way, and now we can stand here and see its future before us.”

The development also will reopen C Street SE between 7th and 8th streets SE and provide space for the area’s weekend flea markets.

The project will create a “connective tissue” between Eastern Market and Barracks Row, Allen said.

“These are two incredibly special, unique, wonderful places in our neighborhood that we love and treasure so much and creating that connection is going to be something that is really special,” he said. “It’s something we’re going to be incredibly proud of.”

The development’s construction isn’t without controversy, however.

A group of Capitol Hill residents tried for years to reduce the height and density of the seven-story complex. But they lost a bid in the D.C. Court of Appeals to send development plans back to the D.C. Zoning Commission.

ANC 6B chairwoman Kirsten Oldenburg, who joined Bowser and Allen in the groundbreaking event, said she realizes that some locals still might think this project isn’t right for the neighborhood.

“I hope that the resulting complex, this beautiful complex . . . will help change this point of view,” she said.