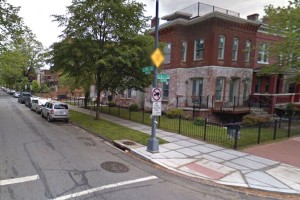 (Updated at 2:55 p.m.) A boy wanted for an armed robbery in Near Northeast Saturday night has been arrested.

The juvenile is suspected of robbing a man at gunpoint on the 1100 block of 5th Street NE about 11:45 p.m. Saturday, police said.

A teenager with a handgun went up to the man and demanded his property, according to authorities. The victim complied, and the juvenile ran away.

Police canvassed the area and located a boy, whom they arrested in connection with the crime.

Another thief with a gun also struck in the Capitol Hill area over the weekend.

The armed robbery happened in an alley on the 200 block of E Street SE about 2:30 a.m. Sunday, police said.

A man was walking in the area when two people approached him, according to authorities. One of the individuals then flashed a handgun before robbing the man.

The victim followed the pair through Garfield Park, where someone struck him in the head, police said.

A woman was walking in the area when a man pushed her and took her property, according to authorities. She was treated for minor injuries.