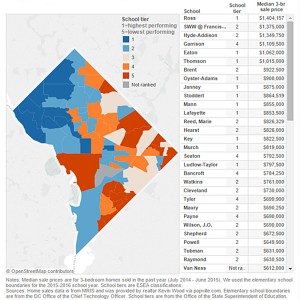 The cost of admission into some the city’s better ranked elementary schools may require the purchase of a Capitol Hill-area house that is about $550,000 or more, according to a new report.

District, Measured released a series of interactive maps today that compare public elementary schools’ testing scores to sale prices of three-bedroom homes in the schools’ boundaries during the past year.

Children of homeowners within a D.C. public school’s boundary lines are guaranteed admission in the school.

Amidon-Bowen in Southwest and Walker Jones on the Hill cost the least to attend, with median home prices near both school sitting at $550,000. They also are among some of the lower ranking schools in the District, although not as low as less expensive schools in the far eastern and southern parts of the District.

Capitol Hill’s most expensive school is also the most-sought public elementary school in the District. Brent Elementary has a wait list 880 names long and holds a median home price of $922,500.

Ludlow-Taylor is the highest ranked Capitol Hill school and the only one on the Hill to be receive a top-tier rating. Median home prices of $797,500 make it the least expensive top-tier elementary school in the city. Other top-tier schools lie in the far northwestern part of D.C. with homes that cost between $819,000 and $1.4 million.

Most Hill elementary are either second-ranked or second-to-last ranked. It costs at least $690,000 to live near a second-rank school. Hill residents need to spend more than $700,000 to avoid lower-tier schools.

Van Ness and Peabody elementary schools were not included in the provided data.