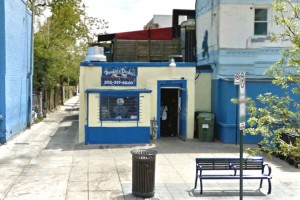 A man pulled a knife on someone in a dispute outside of an eatery just off of H Street NE yesterday.

The attack happened outside of the Horace & Dickie’s at 809 12th St. NE about 12:30 p.m. Monday, police said. At the time, two men were arguing over a chair when one of them flashed the knife.

The suspect is known, according to authorities.