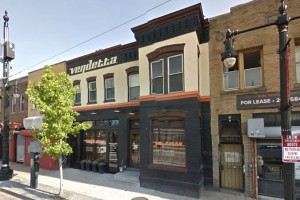 (Updated at 10:40 a.m.) Three men robbed an Italian tavern on the H Street corridor and attacked one of its employees just as the eatery was closing down this morning.

The robbers demanded property when they entered the bar and obtained an undetermined amount of money, according to authorities. One of the men also struck an employee before they fled through the back door.

During the robbery, another worker was able to escape from Vendetta and alert police, who were outside the tavern. But officers were unable to catch the thieves before they ran away.

Police described one of the robbers as an 18-to-25-year-old man who was 5-foot-8 and 150 pounds. That suspect had an afro-style haircut and wore sunglasses and a hooded sweatshirt with black and white stripes.

The other thieves were about 6 feet tall and had thin builds, according to authorities. Both of the individuals wore bandanas with skulls on them. One of them had a green-hooded sweatshirt.

Bryson Lefmann, Vendetta’s events manager, said he and his co-workers are “shocked” by the robbery.

“We hope this unfortunate event can be used to draw attention to the fact this is a community issue,” he said in an email. “These are our community members committing crimes — they are not driving in from far-away lands. We urge and ask those concerned to please call, set-up meetings, lobby and volunteer with organizations that are creating good in the community that you live [and] work in.”

Thank you for those that expressed concern over last nights happenings-we are shocked but grateful our staff is okay.